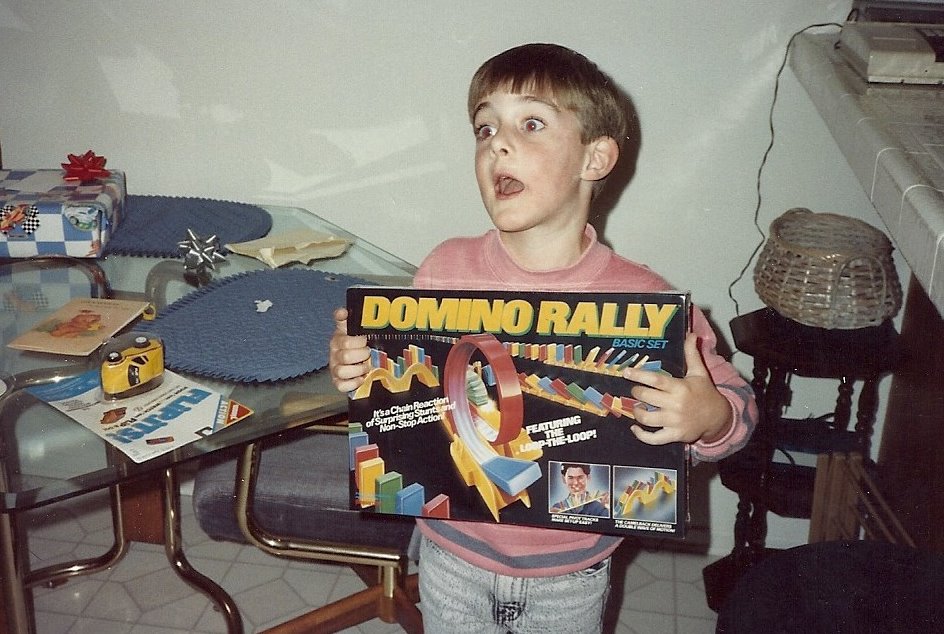 Question:  What is the best present you’ve ever been given? Who gave it to you and what  made it the best?

As an only child, I feel I was spoiled quite often. The magnitude of toys, games, cheap little trinkets, etc. that piled up in my possession is somewhat embarrassing at times. By no means did I have more than many in my classes, but I had plenty to spare. I have no shortage of gifts, at least from parents, as candidates. I really only had one birthday party as a child, and given I was born in great proximity to Christmas, much of the year would be barren, save for my nagging about something at the store. Yet one gift above all others sticks out as the best. A study Bible, given Christmas 1997 by my mom.

Christmas 1997 was a unique Christmas. My grandpa, uncle, and sister came down to visit us. We spent some time with grandpa’s siblings in the Tampa/Clearwater area. The gift giving portion of Christmas was split in three segments: a couple on Christmas eve, a few Christmas morning, and the big gift in the evening. The Bible was part of Christmas eve’s unveiled items. We had to leave early Christmas morning to spend most of the daylight hours in Tampa. The  big gift that evening was a Nintendo 64 console, with Madden 64. As a kid who loved his NES and Super Nintendo, getting the N64 was a big deal. But yet, that Bible still overshadowed it in the end.

What makes it the best gift takes some explaining. After a rough time in our family several years earlier, my mom started to go to church again. She brought me along, and while sermons were unintelligibly boring to my 1st grade mind, it was a seed. As time progressed, my mom took me to other churches and the youth programs planted more seeds. My 5th grade mind was starting to truly grasp who God was and why Jesus was important. I knew I wanted to follow God, I felt the call, but I didn’t truly understand it until the summer of 1997 between 6th and 7th grade. During that span, as I grew to understand the world and its darkness and my need for the light of salvation only God could provide. I embraced God’s call that summer.

I had made the commitment to be  baptized sometime after Thanksgiving. We wanted to time it around the family being in town for Christmas.  I believe it was going to be the evening service the Sunday before Christmas when a children’s performance with music would be held. Ultimately I got very sick the weekend prior to Christmas. I remember waking, walking into the bathroom, and fainting. I had a high fever and was sick a few days, through Christmas. My baptism was delayed until January, namely on Super Bowl Sunday in 1998. That was also the first time my dad went to church with mom and me.

It was really around this time that the Bible I had been given that Christmas started to be utilized. I was reading nightly. The first book I truly read with any kind of personal, private understanding was Ecclesiastes. I simply opened the Bible and that was the book I had landed on. I moved on to the New Testament and continued to dive deeper into God’s word as years progressed. That Bible was my primary source for reading scripture, with its study sections and other augmented learning sections, up until college.

I am certainly no perfect individual. I would say  in many ways I am still guilty of drinking milk when I should be devouring steak in my life with Christ. I didn’t always read scripture with such  consistency, fervor, or reverence. There have been mountains and valleys along the way. But certainly no gift meant more to helping grow the seeds that were planted than that Bible.

While the Nintendo 64 was fun and I had great times with friends, I eventually sold it. I regret that somewhat now, given the retro craze the last decade, but I still have that study Bible. I’ve moved on to other translations and more robust study content, but it is always there on one of my bookshelves as a reminder of the days when I felt the most alive and newly inspired by the creator of the universe.