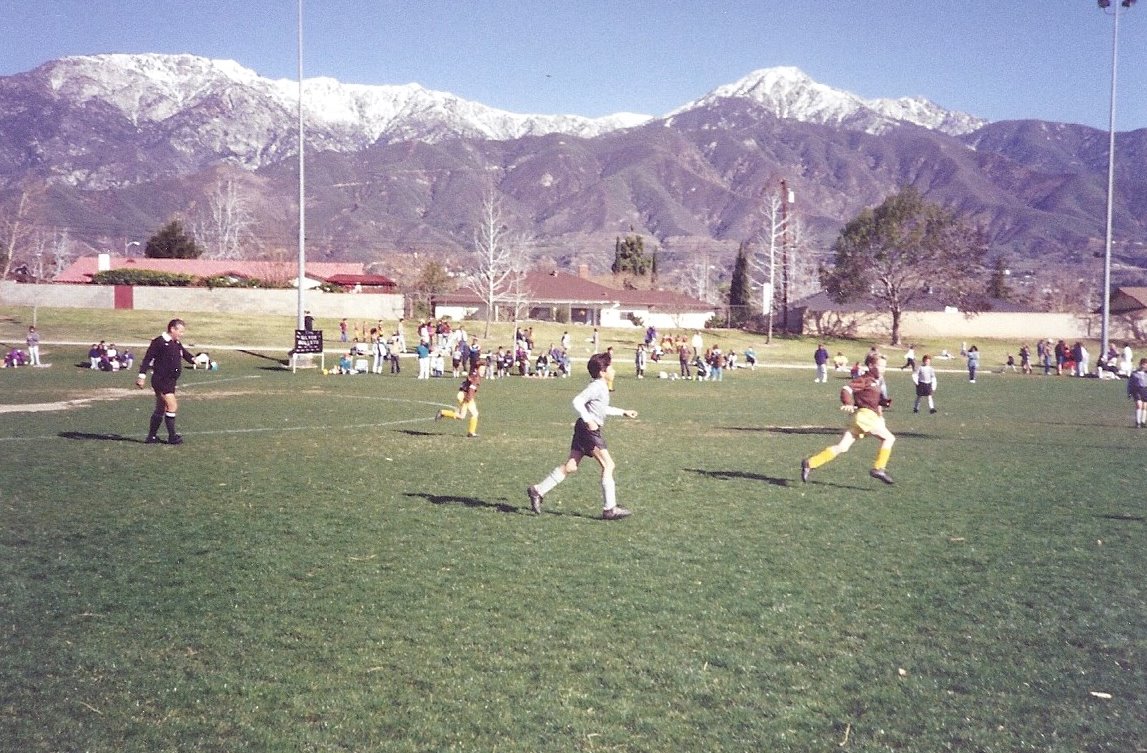 Question: When you think of California, what comes to mind?

I lived in southern California for over seven years. In that span, I lived in four houses and went to three schools.  On an old New York Times or USA Today dialect test, my dialect was clearly Californian.  Others, including my parents who grew up in slightly different regions of the country, showed their dialect closely tied to where they grew up as well. The test seemed accurate and tied to our childhoods. So my time in California was probably  during what I’d consider my core formative years. Though psychologists would probably debate exactly when formative years take place for a person.

Nevertheless, there are a lot of images that come to mind. Probably the most striking are the San Gabriel mountains. We lived fairly close to their base, in the foothills I suppose. In the winter, you’d occasionally see the snow lining the top. When the wild fires came, you’d see them ablaze in the dark of night, flickering in shades of yellow, orange, and red.  Always you could see the trees, tiny as if stubble on  one’s chin toward the top. They always pointed the way north. It was hard to get lost with the mountains in view, even when you’d fly into the valley and see it bathed in dense, brown smog from your birds eye view.

Another striking thing I recall is the flooding of the road my final elementary school was on when it would rain hard in the winter. Being a constant slope down toward the valley, all the mountain trapped rain would flow south, gaining momentum as if an avalanche propelled by gravity. The rapids raged, sometimes knee deep. I recall some making paper boats, which would usually get thrashed in the waves upon launch. If they floated, they would travel too fast to keep up with. At least too fast for the small legs of the elementary school child. The rain would eventually find its way into the aqueduct system. I recall exploring that area once near one of our houses during a summer day. It was a graveyard of debris. The half broken toys always drew my attention.

A thing that has become even more distinct to me is the architecture of the suburbs. Watching a lot of TV programs and films that were filmed in the greater Los Angeles area today reminds me of great times with friends in the neighborhoods. I am instantly warmed with the nostalgia of a more innocent time. A time that may no longer exist, given we played safely in the streets daily and had many unsupervised adventures.

I never had the same friends for more than a couple of years, due in large part to moving so much. I was never lonely as I recall, as being taller than everyone else must have made me a protective magnet in some more instinctual sense. I don’t ever recall being bullied and always had a good group of friends. I like to think I was generally a well balanced young person in emotion and behavior, though I was not perfect, I was also never cruel as far as I remember. I never felt disliked. More mature than those my age may have also played a roll in all these things. It is probably why I spent 5th grade in a hybrid 5th + 6th grade experimental course, with the more mature, self-sufficient 5th graders having half a 5th and 6th grade curriculum.

I remember a sense of community. Unlike where I live in Florida, it felt like the town cared about itself. It had a history longer than Disney and its own traditions to bring people together. It had organized sports and opportunity. Myself playing  baseball, soccer, and football at every possible opportunity. Parents playing in tennis leagues and taking me to parks while they dueled across the net on courts of colored concrete. The only downside was the smog, high cost of living, and general boom of population. Let alone, if you ever had to actually traverse west, you’d get stuck in traffic for days. I didn’t understand those factors as much then, but I did later in life. Other than those rather negative factors, it was not a bad place to grow up at all. I certainly cherish the memories that come back to me from California.