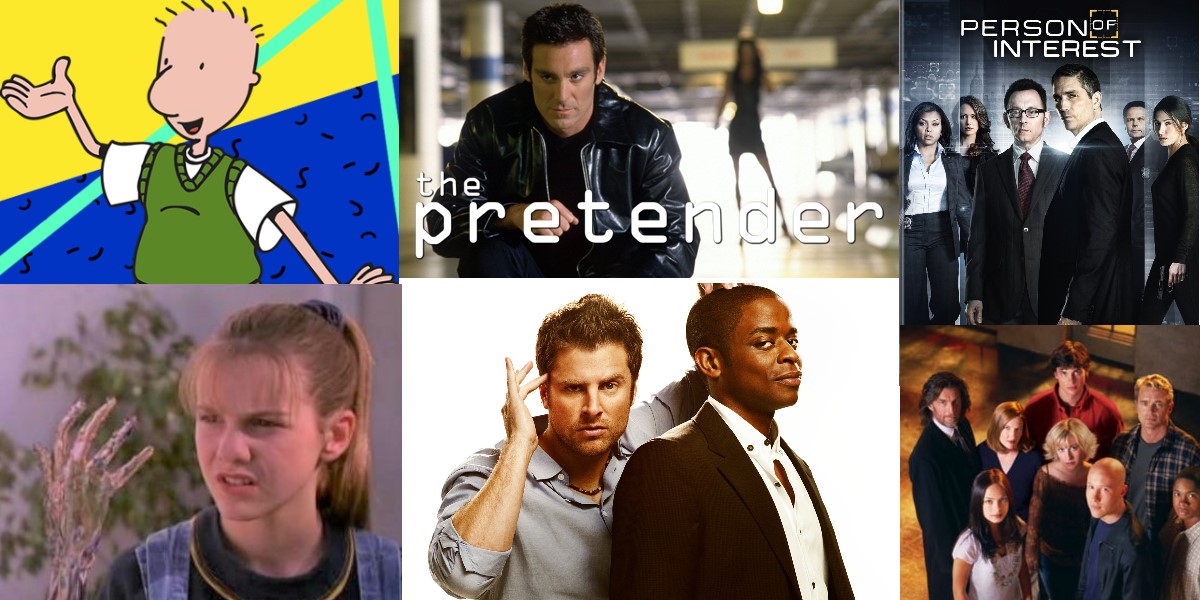 Question: What is your favorite TV series?

It really depends on the era of my life. I will write about each era briefly. I am answering the question  of each era respective to what was aired during that time period live. See honorable mentions for some others I loved outside of eras because they were already fully produced shows.

Nickelodeon was  the channel. There are so many great programs to pick from as a 90s kid. I would probably gravitate toward Doug or The Secret World of Alex Mack. Rugrats was fun for a time, but something about it bothered me as the show went along. Are You Afraid of the Dark? was a good anthology series, and was one of the first “ooh, kids are encouraged to stay up late” to watch something maybe a little darker and edgier than daytime TV.

Having re-watched chunks of these programs though in the last decade to indulge nostalgia, I feel Doug probably holds up the best. I can definitely identify with Doug’s constant catastrophizing at every small event, blowing it up bigger than it would be. The array of characters and interesting storylines simply made it one of the most relatable cartoons of the 90s. The art style was also fun, much in the vein of the Simpsons, but even more extreme given the varying skin tones and outfits. It basically is a garish mish mash of colors that only the 90s can appreciate.  I should qualify that once Disney acquired Doug and made more episodes, the show was very different and not my cup of tea. I was older, so I didn’t really engage with it anyway.

The Secret World of Alex Mack was just an incredibly entertaining live action show, and one of the few serialized (sort of) shows I watched growing up. For its time, you hadn’t seen special effects presented in a kid’s show like it was here, as Alex’s powers made for a unique visual experience.  You can identify with Alex as she and her close friends go through the usual awkward middle school years and trying to figure one’s self out. Alex is being hunted down by the chemical plant that gave her the powers in an accident. So there is a whole dynamic of trying to use the powers for good while not getting caught and turned into a lab experiment.  It all plays well into the mindset of the middle schooler, unsure what to be truthful about or not with others. Can you be real to who you are?

Either way, it was great to grow up in what I suppose would be the golden age of Nickelodeon. Before Sponge Bob was basically their whole shtick.

There is a clear cut winner here: The Pretender.

The Pretender was very  engrossing for its protagonist, the bad guys chasing him, and the ever complex and deepening mythology that stitched it all together. Jarod was a boy, a genius, taken from his parents as a child by an evil think tank known as The Centre. He has the ability to learn things rapidly, thus he can take on a role in almost any profession or scenario after some study.  The Centre had him do various “pretends” during their research. He thought it was being used for good, but almost always, The Centre used his research for ill.  Some thirty years after he was abducted, he escapes, after he learned the truth of his existence.  Thus he begins to live his life on the run, searching for his past and answers to his identity.

Every episode  features Jarod in one or more professions and jobs. He seeks to help those wronged by society. So one week, he is a doctor. The next a racecar driver. How about a stunt man? A safe cracker? A photographer? A firefighter? Jarod did it all. Jarod displays the naïve innocence as he discovers something new each week, be it ice cream, Spider-Man, fake dog poop, silly putty, etc. But he also displays a dark vengeance, usually bringing the bad guys of the week to justice in an ironic way, which parallels exactly how they wronged the victim originally.

Jarod is chased though each episode. A team from The Centre are tasked with capturing him. They are hot on his trail every episode. The show follows this formula for most of its run, but the 20% serialized part of the show mostly revolved around Jarod trying to find out who he was. As a parallel to Jarod, Ms. Parker, in charge of capturing him, learns about all sorts of things at The Centre and her own complicated past. Her key partners in Sydney and Broots are always there, but often don’t feel like bad guys as they help or heavily sympathize with Jarod. Let alone, The Centre doesn’t let you leave their employment alive, so they have no choice but to walk narrow lines at times. The leadership of The Centre, run by Ms. Parker’s father and the evil Mr. Raines, constantly put pressure on them to find Jarod. But more and more of the Parker’s story evolves throughout the show along with Jarod, and it deepens their connection and the entire mythology of the show. There are twists and turns here, and the season finales are some of the best TV I’ve ever watched.

Essentially, you can dive into this late 90s / early 00s to get a feel for the culture at the time. You can enjoy the incredible performance by Michael T. Weiss as Jarod  as he becomes someone new every episode. And you can get lost in the overarching mythology about Jarod, and especially The Centre itself. The show has no true ending, but it is a wild ride between the four seasons and two TV movies that heavily influenced me during this key stage of life. I just wish it had a proper ending.

I’d also say, the music in this show is among my favorites for any media. It is very hard to acquire this soundtrack, but it is an incredibly diverse musical treat that really made the show special to me.

College is hard to pick a show. I got heavily reinvested in The Pretender thanks to re-runs and DVD releases. A friend and I showed each other shows we liked, as a lot of things had started to get released to DVD. I introduced him to The Pretender, The Dead Zone, 24, and others. He showed me Smallville, The A-Team, and others.  I picked up on Smallville and got hooked the summer of my junior  (or was it senior?) year of college. 24 was also must watch television for most of college. Outside of that, I was mostly watching a lot of procedural crime dramas as I wasted time on reruns.  All flavors of Law and Order, CSI, etc. USA Network was a good source for original programming, as The Dead Zone, Monk, Psych, and Burn Notice were all solid.

I’d probably throw Smallville up there with Psych in the end. 24 would be up there too, but it seemed to have less compelling content after season 5, which is why I’d drop it. Psych got a lot better as it progressed. Shawn Spencer and Burton Guster (not Bruton Gaster) made for a wild comedic experience, throwing in nostalgia and parody of much of the programming on at that time. Fake psychic detective and a reluctant partner with lots of hijinks? Doesn’t sound like it would work, but it is great.  It was almost a parody of Law and Order, Monk, and The Dead Zone all in one. The most important thing is both Smallville and Psych ended well in their original runs. Cannot say the same for most of the others.

This is another era with a clear cut winner: Person of Interest.

As an IT person, technology fascinates me. Security and AI is a growing in interest as well. Person of Interest has a potentially realistic look at where our technology and security are leading us. Both for the good it can do, and the abject horror it could produce.

Person of Interest starts out fairly formulaic.  A surveillance system, known as The Machine, was created by a reclusive tech genius billionaire. This system helps prevent terrorist attacks with its intelligence gathering by all means of cameras, microphones, etc. The Machine doesn’t get help from law enforcement to stop the lesser crimes and events though, even though it is keenly aware that something is about to happen. Instead, it sends a social security number to our tech genius, Harold Finch, when it detects something is about to happen that revolves around the weekly person of interest. Harold recruits in the first episode a down, depressed, and homeless ex-special forces operative named John Reese. Together, they look into the social security number received to stop whatever is going to happen. You don’t know if you are dealing with a victim or perpetrator. So the show naturally has twists and turns within each story as they unravel the mystery.

Person of Interest had a little bit of The Pretender’s flare for unique stories, as John and Harold frequently have to insinuate themselves into other roles, jobs, professions, etc. as part of unraveling the weekly mystery. But the thing that drew me to this show was just how serious it generally took itself. There were very few filler episodes and the stories were almost always engaging. The series also becomes far more serialized by its third season, and is almost exclusively serialized by its end. There are other supporting and main cast characters as the show advances and it had some incredibly intelligent writing. There are recurring story arcs  and villains which gives the show a lot of depth. I think the show ended itself pretty well. If you are fascinated by the duality of technology’s impact on society, privacy, safety, and behaviors, this show is a good one to get lost in for five solid seasons.

I’d also like to add, the music for this show was incredible. Pick it up and give it a go with the three releases. covering the first four seasons.

I’ve really wandered away from the TV in recent years. Since Person of Interest concluded, I really am not watching much programming now. When the Big Bang Theory ends, there really isn’t going to be anything I watch regularly. I’d say YouTube videos are taking up a lot more of my time. Some are educational and theological in nature. Others are all over Star Wars. The point being, I don’t know what is going to catch my eye. I like serialized stories more than anything, and I like serious stories that are well written and produced. The push to reality TV and bland binge programming from streaming services isn’t doing it for me.

I basically just want to show some love to the original Twilight Zone. The incredible anthology series from the  1950s and 60s is as thought provoking and timeless as anything produced in this media. I didn’t really get introduced to this in earnest until the late 1990s. You’d think a teenager 40 years after the fact wouldn’t care about black and white programs from years gone by, but this is some of the best television ever produced. The current modernization of the concept pales in comparison and lacks the subtly and timelessness that the original possessed. Let alone, all the other prior remakes that didn’t last very long are not worth much by comparison either. It really took me about 20 years to fully get through this whole series, between the marathons each year on New Years and then finally buying the entire series on DVD a decade ago. So of all the shows, this one is the one that spans time and eras.